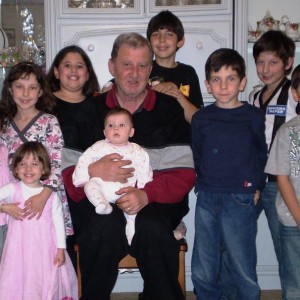 Every now and then when I meet a family, I feel truly blessed to have met them in one of the most horrible times of their lives. Last week, I met the Scicluna family, sitting with Natalie after the loss of her husband Frank was a sad, yet it was a wonderful experience. Frank’s four girls – Tania, Lisa, Nicole and Karen – were there too and they wanted input into how their father was to be remembered.

That’s the thing about a big family, everyone has the same yet very different memories of their loved ones and each of his girls all shared – in fact laughed – about some of the memories they shared, but all of Franks girls got to share different parts of his personality through their lives, so each had different, yet wonderful memories of their father. Each of Frank’s girls spoke so very well at his service, yes, there were tears, of course you’d expect that as each of the girls remembered parts of their father that had many of the over 150 people crying in remembrance too.

We laughed, cried and generally had a cleansing experience talking about Frank’s amazing life, from coming from Malta to Australia as a young man, meeting Natalie through a family friend, having children, his Socceroos career and then ultimately his passing. This made for an experience, I’ll never forget…again, sometimes I’m just blessed to meet with wonderful families.

I hope to not with with them again for a long time now, but I know when I do, there will be a bond with this family that I feel was somewhat magical.

BORN INTO THE WORLD ON THE FIFTEENTH DAY OF SEPTEMBER, AFTER THE END OF THE SIEGE OF MALTA IN 1943, FRANK WAS THE SECOND ELDEST TO DORIS AND LAWRENCE SCICLUNA, BORN IN HAMRUN MALTA.
RAISED IN MALTA UNTIL THE AGE OF TWELVE, WHEN HIS FATHER LAWRENCE ALONG WITH FRANK AND HIS OLDER BROTHER MORRIS DECIDED TO IMMIGRATE TO AUSTRALIA, THEY ARRIVED IN MARCH OF 1956 AND SETTLED IN AUBURN, THEY FAMILY FOLLOWED SOON AFTER AND THEY MOVED TO FAIRFIELD WEST.
BEING A TALL LAD, HE DIDN’T ATTEND SCHOOL, BUT INSTEAD WENT STRAIGHT TO WORK, FRANK KEPT HIMSELF BUSY, OFTEN HAVING THREE JOBS ALL THROUGH HIS WORKING LIFE, THRUTH BE TOLD, FRANK LOVED THE OVERTIME AND WOULD OFTEN CHASE THE OVERTIME FOR MORE MONEY TO HELP HIS FAMILY.
THERE WAS THE WINDOW DRESSING WITH WYNN’S, MISTER MINUT, AMP INSURANCE, THE BAKERY, CORNINGWARE THAT ALL THE GIRLS REMEMBER, HIS TIME AT INVICTA, BUT THE MOST MEMORABLE WAS HIS TIME SPENT WORKING AS THE NATIONAL MANAGER OF HALLMARK CARDS – THERE FOR OVER A DECADE.
AT THE TIME, HE ALSO WORKED IN THE SYDNEY CBD AT THE PHOENICIAN CLUB.
FRANK WENT ON TO BECOME ‘THE BOSS’ AS HE LIKED TO BE CALLED WHEN HE BOUGHT HIS OWN HALLMARK CARD SHOP, THIS GAVE HIM MORE TIME TO REALLY FOLLOW HIS PASSION – FOOTBALL AND WOW WHAT A COLLECTION!
PICTURES OF FAMOUS FOOTBALLERS, PELE, MARADONA, FRANZ BECKENBAUER AND SO MANY MORE! THE MEMORABILIA FROM HIS 10 YEARS AS A GEAR STEWARD OR “THE BABYSITTER” WITH THE SOCCEROOS IS ALL OVER THE HOUSE. THIS TOOK HIM TO ALL PARTS OF THE GLOBE AND PROVIDED GREAT MEMORIES.
HE ALSO ENJOYED HIS TIME AS A JOURNALIST AT AUSTRALIAN SOCCER WEEKLY AND LATER IN THE LOCAL CUMBERLAND PAPERS TOO, HE ALSO HAD MORE TIME AT MARCONI.

IT WAS HOWEVER AT THE AGE OF 18 HE HAD HIS GREATEST ACHIEVEMENT. HE MET A BEAUTIFUL YOUNG LADY NAMED NATALIE, THANKS MAINLY TO HIS FATHER MEETING AN OLD FRIEND AND THAT FRIEND HAD A DAUGHTER….THAT DAUGHTER WAS NATALIE! ENGAGED IN 1964, HE TOOK HIS TIME, THEY MARRIED IN 1966, THE DAY AFTER NATALIE TURNED 19. THEY WERE BLESSED WITH FOUR BEAUTIFUL DAUGHTERS TANIA IN 1968, LISA IN 1969, NICOLE IN 1971 AND KAREN IN 1975. NO WONDER YOU SPENT ALL YOUR TIME AT THE FOOTBALL!!
91-91 SAW THE FAMILY TRAVEL TO MALTA TO LIVE BUT MOST OF THEM WERE BACK WITHIN 6 MONTHS, MAINLY THANKS TO BRYAN ADAMS.
HOLIDAYS WERE BASED AROUND WHAT ELSE, BUT WORLD CUPS!!
THE EUROPEAN HOLIDAY IN 1989 WAS A HIGHLIGHT, NATALIE DOING WHAT SEE WANTED, THEN FRANK DOING WHAT HE WANTED, GOING TO EVERY SINGLE FOOTBALL GROUND POSSIBLE.
THE TRIPS TO MALTA, THOSE BUS TRIPS TO NELSON BAY AND THE ENTRANCE EVERY YEAR…18 PEOPLE, 2 WEEKS, ONE HOUSE – YOU CAN ONLY IMAGINE THE CRAZINESS.
FRANK WAS ALMOST FOOTBALL ROYALTY HIMSELF, WITH ALL OF AUSTRALIA’S MOST NOTABLE PLAYERS ENJOYING THEIR TIME WITH FRANK AND OWING A LOT TO HIM. EVERY VIDEO OF MARCONI GAMES, EVERY NSL SEASON AND EVERY EUROPEAN CHAMPIONS LEAGUE GAME…I THINK IT’S SAFE TO SAY, HE LIKED FOOTBALL!
THEN THERE WAS HIS TIME WITH MIKE AND RINO, THE THREE MUSKETEERS, THEY TALKED FOR HOURS ABOUT EVERYTHING, SEX, RELIGION AND POLITICS.
FRANK’S LATTER YEARS OF HIS LIFE WERE SPENT BATTLING DEEP DEPRESSION WHICH MADE HIM WITHDRAW FROM MANY FAMILY AND FRIENDS, HE SPOKE OFTEN OF HIS FRIENDS BUT COULDN’T COME TO TERMS WITH HIS DEPRESSION, THIS MADE IT TOUGH FOR A LOVING AND CARING FAMILY MAN.

I thanks Natalie and her girls for the honour of laying to rest the man they love….Frank Joseph Scicluna.

This blog was written with the consent and for his family, wife Natalie, for his daughters and their partners Tania and Ramazan, Lisa and Frank, Nicole and Barry, Karen and Mark.