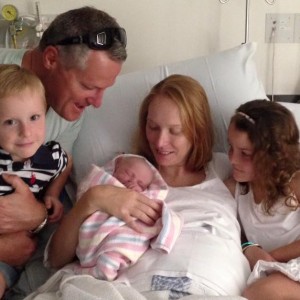 So on Sunday, I officiated at the annual Fathers Day Memorial Service for families that have lost any male/father figure in their family over the past twelve months. It was an incredible honour to be asked to do this by Olsens Funerals and hosted by Woronora Memorial Park.

Can I be honest? I was the most anxious I’ve ever been…so many families that I hadn’t seen, many I had helped through the grief of loss, but equally many that I hadn’t, so that was nerve racking!

I was asked, as a father to describe what fatherhood means to me….so in front of so many people, it gave it a red hot crack…and it worked, because dads are simple and we want to provide a safe and stable family environment. Here’s a piece of what I said…

So what does fatherhood mean?

To me, as a father of three, Addison 6, Finnegan 4 and little Emmerie Jayne just 10 months, I look to my father – Travor, and try to do the things he did for me, so I can pass those values onto my children, his grandchildren – his legacy!

A Father –  is a man who loves his kids enough to let them make mistakes. My father is still my guide and teacher, but he also cared enough to say “no” to me even when I might be angry at him in that moment. That’s because a father tries to do the right thing, not the easy thing.

That’s why I love my father for the simple things he’s taught me;

– like that I MUST learn to drive a manual, even though I’ve switched to Auto these days, so has HE!

– always have tomato sauce on your pie and sausage rolls are bad, Never in any case ever order a Chiko Roll.

– always filling up the mower AFTER you use it, it comes in handy next time

– respect your mother, respect all women…they’re actually stronger than us!

– look a person in the eye when you shake their hand

– it’s OK to hug another man, there’ll be times when you both need it

– support your footy team even when they’ve a rubbish season

– and look after yourself and pass this onto my grandchildren!

That’s the short version of my fathers advice, some good, some not so good, but that’s what Fathers do, they try their best regardless of the situation.

I think, part of the “fatherhood mystique” to me is that dads often keep a sense of playfulness and fun about him, my father wrestles my children, reads them books and races them in a shopping trolley, all the things I also do with my kids.

The best part is that dads don’t care if we look silly — or what people think of us. Dad’s are focused on having fun, providing for a family and ‘showing up in hard times.

And you know what?  It’s those small things my son talks about when he tells me what he likes best about his ‘Pop’ – my father!

A father is also someone who loves their kids even when they’re at their worst. They might not like the behaviour, but they try to see their child for who he or she really is — beyond the morning tantrum, the teen age eye roll or the perpetually messy room.

So here’s to all the fathers, grandfathers, stepfathers, and father figures making a difference in the eyes of the kids who love them.

Sure, the big things you do are important, but some of those small, simple things are what your child will remember for the rest of his or her life…I know I do.

And that is the essence of what fatherhood means to me, so let’s celebrate Fathers!