I remember being single, it was awesome! You could work and then play, you had good times with mates and really didn’t think much about ‘the bigger picture’.

I had those times and remember them fondly…..now I’m a father, I still have good times, but they are with Tanya and the kids. I must admit, these times are far greater than my single life. Shaping young lives and enjoying everything that life has to offer is an amazing thing. Sometimes I really do think as a father ‘I’m blessed’, but I guess most dads do think that.

Now for the shit part! I couldn’t imagine the pain and hurt that comes with losing a child…..Oh the pain of just thinking about that enough to make a big unit want to break! Tanya, Addison and Finnegan are everything to me and I’m assuming that most dads feel the same about their wife and small treasure in their lives, right dads? 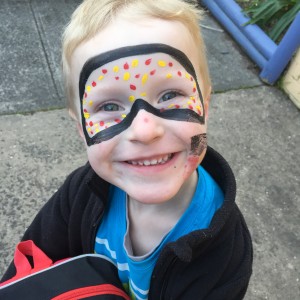 I still remember vividly, that day about THREE years ago, when Finnegan was rushed to Westmead Hospital and stayed their for five nights. The hurt, pain and anxiety that builds through you as doctors can’t find what is making him hurt so badly, that with the simple loving touch of his parents makes him scream in pain……..’Dark days’. He made it through and is now a vibrant little tacker that I love to bits!

But then there’s the parents who feel that pain and anguish of losing their little one. No parent should EVER have to say goodbye to a child, it’s not fair, it’s supposed to be the other way around – Children bury parents – that’s why the story of little Conley Thompson strikes at the very core of every parent and we all feel for any parent that loses a child.

When you hear of someone losing a child, it does make you hold them tighter before tucking them into bed.

Here’s the story of a little Superhero that had me in tears…..

A superhero-themed funeral has been held for Conley Thompson, the seven-year-old who died when he fell down a pipe on a building site in Barnsley, South Yorkshire, UK.

His coffin, which was also decorated with superheroes, arrived at St Thomas and St James’ Church, in Worsbrough, in a horse-drawn hearse with the driver dressed as Spiderman.

The Rev Trevor Keightley described Conley, who would have been eight on Monday, as a cheeky and “loveable rogue” who loved climbing and music.

“Everyone in Worsbrough, and around the country, was shocked when we heard of Conley’s tragic death,” he said. “Conley remains with us through the memories that many will have of him. We’ve been touched by Conley near and far.

“He was so full of life and promise, and that’s what hurts the most: never seeing him grow up. So we are left with the memories of Conley and those memories are to be treasured.”

Keightley read out a poem written for Conley by his aunt before he was born. Another poem described Conley’s love of Spiderman, Iron Man and the Avengers.

A search for Conley was launched on 26 July when he failed to return home after telling his mother he was going to play with friends. His body was found the next day in a pipe on the building site. A postmortem examination found that Conley died after becoming stuck in the vertical pipe.

South Yorkshire police said there were no suspicious circumstances surrounding his death. Detectives are investigating Conley’s movements on the day he died and appealed for anyone who may have seen him after 6pm on 26 July to come forward.

Floral tributes at the funeral included Thor’s hammer and an Avengers-themed wreath and one mourner carried a Spiderman balloon.

Conley’s mother, Paula, wore a Marvel comic dress, while his grandmother wore leggings patterned with the superheroes and a red T-shirt saying “Conley and Super Nan-nan”.

Saying goodbye to someone is hard enough, but when that someone is just 18, it’s even harder...

There are 0 comment. on "The Superhero that will make you cry"

Bloody hell I’m lucky! If it wasn’t for the wonders of technology and Skype calls, multiple FaceTime calls, I’d...