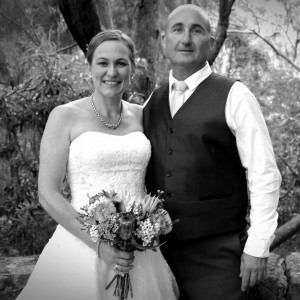 I’ve known David Simister for years, he’s a great guy – started Men4Life group, is an amazing Welfare Officer and just an all round bloody good bloke.

David is the bloke who appeared in the local Yellow Pages – on the front cover for all the good work he does, so when his big bald head lobbed in my office, I was chuffed that he was getting married.

I met his fiance and soon to be wife Helena – wow! what a great lady and perfect for Dave – instantly I knew this was a ‘perfect match’, her only problem?

She’s a Sea-Eagles supporter! Being a Parramatta Fan, we are arch and mortal enemies, surprisingly she’s so sweet and really nice, not like other Eagles Fans!!!

So we got down to the nitty gritty and discussed exactly what they were after…simple, elegant and FUN! Check, check and CHECK!

Well, all the guests had a ball, the ceremony was great and David hasn’t stopped thanking me since, but that’s mainly cause he’s a great bloke, not that I did a good job! 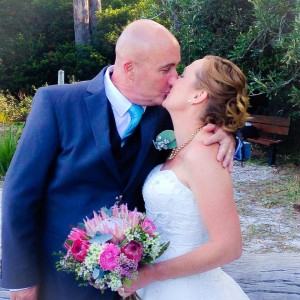 We had some good laughs in ‘their story’ that was told of how we came to the wedding day, went a bit like this….

They were matched up by friends for a blind date nearly eight years ago. David was taken to Helena’s place for a party. After a few too many drinks one of the lads at the party started playing his guitar and singing, David – ever the shy flower latched on to a bongo drum and decided he’d joined in.
It turns out he’s NOT a musician and Helena was trying to take the Bongo of him.
This kinda killed the chances of the blind date going anywhere, so that was that.
David remembers a few weeks later at the St. Georges Basin Country Club waiting at the bar for a drink, where he looked across the bar and saw Helena waiting at the bar too. That was it! Just two weeks later Dave had moved into Helena’s place and have been together ever since.
Family means everything to both David and Helena and that’s why they’ve decided to marry. Marriage is all about the simple things, like Dave remembering her smile when he proposed, the everyday things for Helena, watching the kids grow and achieve, being able to tell each other when we’re not ok.

What a beautiful story of two true romantics who just love each other so much. It was great to be apart of their big day!

So whether it’s elegance, romance, fun, a casual vibe or anything that you may want (need) for your wedding day, I’d be delighted to help you!

There are 0 comment. on "Beauty and The Bald Bloke"