When I first became a celebrant, a few mates called and asked ‘Are you serious’?

After their laughter subsided, I now get to take a few phone calls from friends asking if I could renew their vows, to marry them and one asked ‘could I marry his daughter’? In the nicest possible way of course, that mate was Mick, I’ve known him for close to 10 years.

His daughters name is Makayla – ‘she’s young, in love, but really shy’ was what Mick had told me, and her fiance Nathan, just as shy, if not more so!!!!

So I met with Nathan and Makayla thinking – nobody could be THAT SHY – I was wrong, they are! We can laugh about it now, but our first meeting was pretty quiet, both sat in my office and said, ‘do whatever you have to do to make us married’! I’m sure that many other celebrants would’ve heard that from time to time.

I could see that both Nathan and Makayla were madly in love, but neither really wanted to write their own vows or speak into a microphone in front of 100 close family and friends. They were and still are very shy – around the people they don’t know!

The resistance of not even wanting to do vows and not wanting to speak on a microphone, to not wanting a long drawn out ceremony with too many things, turned into a candle ceremony, two poems and beautiful vows that both should be really, REALLY proud of!

I remember silly things about wedding days…Camden Vally Inn’s wedding garden was beautiful, a really nice light breeze, gentle enough to blow the tiniest flowers from a huge tree as to make like snow flakes dancing across the garden.

It’s hard not to forget Nathan, he was a ball of nerves, so it was up to the bar for a settler….that didn’t work so it was off to the bathroom and then….the look on his face when her saw his girlfriend arrive and about to become his wife was MAGIC! All nerves faded and he only had eyes for Makayla.

So here’s a little snap shot of ‘their story’…..

Meeting at the age of 13 down on the South Coast, not too far from Ulladulla. Nathan traveling to a caravan park with his parents and Makayla the local girl who had friends not too far from ‘all the Sydney boys on holidays’. After these two met, they were kinda smitten for one another. Makayla telling her parents, she was off to visit her friends near the van park again, and again and AGAIN!

Their friendship grew into becoming partners and now they join one another as husband and wife some eight years after meeting.

I know these two will have an amazing future together, both have great families to care and nuture their marriage into something to be proud of, much their each set of parents marriages.

Oh and now they are expecting too!

So, whether you are shy, loud, want something quirky or all of these types, I’m more than happy to make your special day the one that you too will never forget! 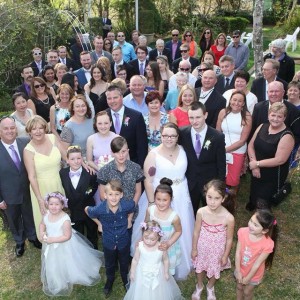 Nathan and Makayla with their guests 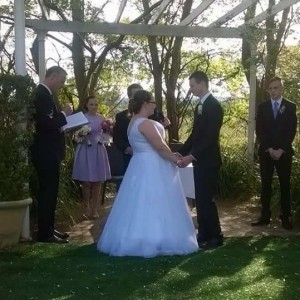 There are 0 comment. on "Mr and Mrs Lenehan – Most shy couple in Australia"