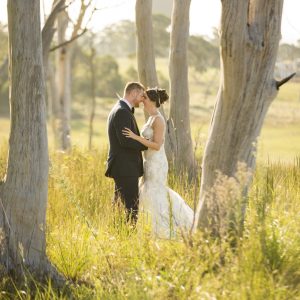 You get to meet a lot of people being a celebrant…and I mean A LOT!
Some come into your life purely to get married and drift out of your life again after some time, others will becomes friends and I will see them often and get to be a part of their lives in an amazing way.
That’s what happened with Erin, her mother was at a funeral service and thought I did a wonderfully dignified job for the family who were grieving.
I received an email from Erin that said her mother had seen me and asked her to contact me and I’m glad she did, Erin and Don are an amazing couple – although I’ll admit, I was concerned at first…I was put through the ringer!!

Man, did they have some tough and challenging questions and they didn’t stop at just 3-4, we’re talking 13-14 and possibly more, but that’s great and what I really like about couples who are proactive about THEIR day.
I remember when I first met Don, I wasn’t sure about him, but that’s because he’s shy, reserved and doesn’t say too much until it needs to be said, but once we got talking, we had a ball…we even played on his Scale V8 car set…we had a great time and laughed a lot….we were like two little boys just having fun!

So after meeting Erin and Don, they decided to book me as their celebrant and for that, I’m truly greatful! 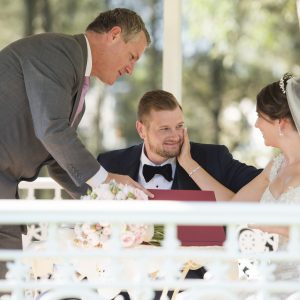 But WHAT A WEDDING!

Erin has the most amazing smile, she beams and is just that happy, gorgeous girl who is so proud of Don and for Don, he’s smooth, calm and sophisticated…..on the inside though ‘he was a bundle of nerves’!
Don is a perfectionist, he made sure everything was going to be right for the day, even asking me about a mate at the Bureau of Meteorology and what he thought the weather might be for the day – he needed it to be perfect…oh and my mate, he got it wrong! The day was warm, bordering on hot!
The guest list was huge, people were treated to an amazing display of love from Don to Erin and vice versa, these two are truly in life and Don vowed to have a relationship half as good as his parents Don Snr and Vicki. 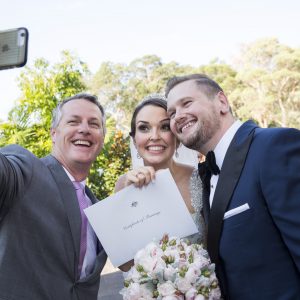 Here’s just a bit of “their story”…
The surprise of I DO!
Don can be a bit secretive right?! Well, He’d convinced Erin that due to the US Dollar they couldn’t get engaged until about now, a tale about how he couldn’t get the diamond he wanted, so they’d have to wait.
Instead going out for dinner for Erin’s birthday, asked to go get hair and make up done so she could feel nice and girlie.
A private room, an arrangement of 50 red roses, rose petals all over the floor, candles on the table. Erin remembers crying straight away because it was beautiful, and Don wanted to make up for a previous birthday, which was a disaster!
Halfway through the night Don asked Erin to open her birthday present, which was an overnight bag, and while she was unwrapping the gift, he got down on one knee.
The words he shared with Erin that night will remain treasured and beautiful between Don and Erin only!
Erin said yes and was trying to hug him, but Don was trying to grab her hand to get the ring on – both laughed and the ring was finally placed on her finger after a loving kiss.

That was a great day and since that day, I’ve done a naming for the family too, NO, not Erin, well ‘not yet’! 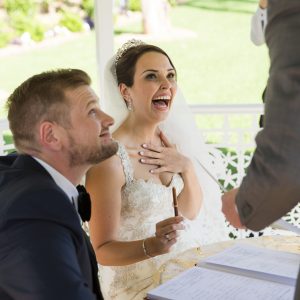 There are 0 comment. on "The Great love of Don and Erin"